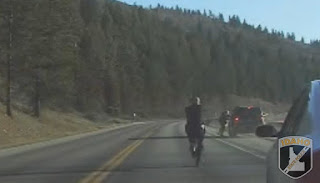 Idaho State Police are looking for the victim of what appeared to be a carjacking attempt that occurred Tuesday, March 16, 2021, as a Washington state man tried to run away from a Trooper. Troopers found the man driving a stolen vehicle while responding to citizen complaints of an erratic driver. The man was soon arrested after he jumped into a lake and a Trooper went in after him.

Possible Carjacking Victim: Idaho State Police is releasing video and an image of the suspect running from a Trooper and attempting to open the driver's side of a black Jeep that had stopped on the southbound shoulder on Hwy 95 near Westmond Road above Cocolalla Lake. The driver of the Jeep attempted to drive off but the suspect held onto a lowered window. The Trooper witnessed the Jeep stop again, the suspect let go and continued to run. The video can be found at https://youtu.be/_Hxx5HJUe_A.

Troopers are hoping to find the driver of the Jeep. Anyone with information is urged to contact the ISP Coeur d'Alene office at 208-209-8620.

What Happened: Tuesday afternoon, March 16, 2021, at 4:13 p.m., ISP dispatchers alerted Troopers to citizen complaints of a reckless driver forcing others off the road, passing on the right and into oncoming traffic on Highway 53 near Highway 41 in Rathdrum. The vehicle was described as a white 2004 Lexus.

Soon after, a responding Trooper located the vehicle on northbound Highway 95 traveling at least 20 miles above the posted speed limit of 55 mph. The Trooper attempted to stop the suspect vehicle, but instead, the suspect accelerated at a high rate of speed and continued to drive recklessly, speeding and passing in no-passing zones. The Trooper pursued but lost the vehicle when it turned into a neighborhood.

At 5:15 p.m., a second Trooper spotted the suspect vehicle at a gas station on Highway 95 at Westmond Road. He saw a man, later identified as Cunningham, at the gas pump. As the Trooper attempted to make contact, the suspect got back in the car and drove off, hitting and damaging both the Trooper's patrol vehicle and the Lexus. The Trooper pursued the suspect south on Highway 95.

After a short distance, the suspect jumped out of the vehicle and ran. It was at this time, the suspect attempted to make entry into the Jeep. The Trooper deployed his Taser in an attempt to stop the suspect, but the attempt was not successful. The suspect continued to run into Cocolalla Lake.

An Idaho State Police supervisor and two Bonner County Deputies arrived on scene. The ISP supervisor, seeing the suspect now in neck-deep water, went into the water himself, was able to make contact with the suspect and bring him safely to shore. The suspect was taken into custody and booked into the Bonner County Jail on the above charges.

During the investigation, the suspect was found to have two outstanding felony warrants from Washington, be in possession of methamphetamine, and the Lexus he was driving had been reported stolen from Washington. Inside the stolen vehicle were two open bottles of alcohol and some construction tools also recently reported stolen.
###
Posted by Idaho State Police at 10:39 AM