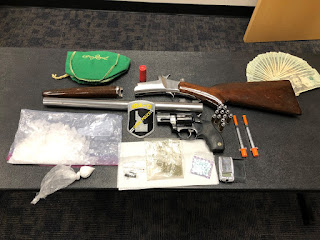 For Immediate Release: 01/29/21 10:20 am
Please direct questions to the District Office

On January 27, a multi-agency enhanced emphasis patrol was conducted on the highways around the LC valley. Enhanced emphasis patrols focus on highway safety and traffic violations, and also look for evidence of criminal activity that often involves the roadways, like human and drug trafficking. Taking part in the effort were officers with the Nez Perce Tribal Police Department, deputies with the Latah County Sheriff?s Office, agents with the Federal Bureau of Investigation and troopers from the Idaho State Police.

As a result, approximately a quarter pound of methamphetamine, 1.6 grams of heroin, 7.3 grams of fentanyl pills, almost 700 dollars in cash, and two firearms were seized. Seven arrests were made with ten others being cited and released.

We would like to thank our community for the support as we work continually to make out home a safer place.