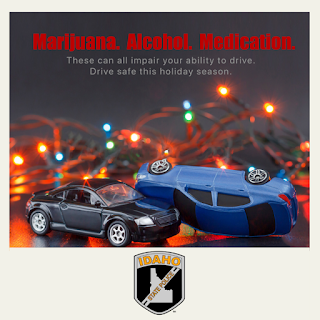 Starting today, the Idaho State Police will have all available troopers working throughout the state to keep Idaho roads safe. The increased patrols will focus on reducing the number of impaired and other unsafe drivers on Idaho roadways during the holiday season. Specially trained Drug Recognition Experts (DRE) will also be working during the holiday to identify impaired drivers. DRE's provide law enforcement agencies with certified experts capable of gathering evidence to substantiate charges of impairment by drugs in DUI/drug investigations.

"The holiday season should be a time of year when people can spend time with family and friends. We want to keep our roadways safe so everyone can enjoy the holidays," said Major Gardiner of the Idaho State Police. "We're working to stop impaired driving crashes from affecting any more Idaho families."

Impaired drivers put themselves and others at risk. "Crashes caused by impaired drivers are 100% preventable," said Major Gardiner. "Driving impaired by any substance, drugs, or alcohol, is illegal and can be deadly. There's no excuse for people to choose to drive impaired. It's not worth the risk to yourself or others."

ISP reminds the public that we all can play a part in preventing impaired driving, and recommends these alternatives to drinking and driving:

Remember, it's never okay to drink and drive. Designate a sober driver or plan to use public transportation, a taxi, or rideshare to get home safely.
If you see an impaired driver on the road, contact ISP at *477 from any cell phone.
If a friend or relative is going to drive impaired, make arrangements to get them home safely.

Increased impaired driving patrols will continue through New Year's Day and will include ISP Troopers in all six ISP Districts.
Posted by Idaho State Police at 1:45 PM