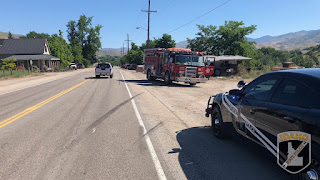 Idaho State Police Troopers responded to a multi-vehicle collision that occurred this morning on Highway 55 on the south side of Horseshoe Bend.

The incident was reported to ISP at about 9:00 a.m. and involved four vehicles and a building.

The driver of a commercial truck hauling lumber northbound on Highway 55 appears to have lost control and crash into a pickup truck, also traveling northbound. The pickup was pushed off the road and into what appeared to be a small shop-type building. The driver of the pickup was taken to a nearby hospital with what appeared on scene to be non-life-threatening injuries.

The lumber truck continued, then collided with a small SUV, pushing the SUV onto the trailer of the vehicle just ahead.

All occupants were wearing seat belts.

Investigating Troopers cited the driver of the lumber truck, Ronald J. Peeples, 42 of Meridian, with reckless driving, a misdemeanor.

Traffic Impact: No lanes were closed as a result of the incident, however, traffic was slow through the area for most of the morning as Troopers and emergency responders investigated and worked to clear the scene. The incident was cleared just before noon.
Posted by Idaho State Police at 2:10 PM