Update: Investigation into damage to the Liberty Bell replica outside the Idaho Statehouse 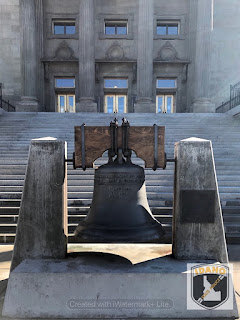 Update: This morning, state employees were able to repair much of the damage done to the Liberty Bell replica that sits in front of the Idaho Statehouse. The damage was reported to have occurred Saturday evening. Idaho State Police are investigating the vandalism. Troopers appreciate the witnesses who have come forward with information which is helping further the investigation.

What Happened: Witnesses say Saturday evening at approx. 8:40pm, a man parked a sedan at the curb along W.Jefferson Street in front of the Idaho Statehouse. He got out of his car, approached the Statehouse steps, and using a sharp object, scratched an expletive into the heavy metal bell.

Again, state workers were able to repair much of the damage this morning.

Investigation Ongoing: As the Idaho State Police investigation is ongoing, additional information will be released as it becomes available.

Troopers at the Statehouse say the Liberty Bell replica has become a collection point of sorts since demonstrations began just more than three weeks ago. Items from memorials and mementos to pizza boxes have been left at the base of the bell. State workers have been diligent about trying to keep the area clean and safe for those continuing to use the Statehouse steps as place to visit or demonstrate.

About the Statehouse Bell: According to a booklet produced by Idaho Legislative Services in 2010, the full scale replica of the Liberty Bell was molded in France and given to the state by the U.S. Department of the Treasury in 1950.

June 22, 2020: Idaho State Police are investigating a report of damage done to the replica of the Liberty Bell outside the Idaho Statehouse. The bell sits just below the front steps of the Statehouse on W. Jefferson Street. The damage was reported to have occurred Saturday evening, June 20.