For Immediate Release: 06/22/20 10:00 AM
Please direct questions to the District Office

"I am extremely fortunate to be surrounded by outstanding leaders at every level within ISP and specifically here in District 2. The Lieutenants, Sergeants, Detectives, Troopers, and our support staff, all give me great confidence moving forward in this new position." said Captain Adamson.

"We are excited for Captain Adamson and the professionalism and dedication he brings as our new District 2 Commander." said Colonel Kedrick Wills, Director of the Idaho State Police.

"We worked together when I served in Lewiston and I have always been impressed with his leadership and ability to build relationships with our allied law enforcement partners and the public. Captain Adamson will do a great job for Idaho State Police and the people of District 2." Said Col. Wills.

Captain Adamson feels very at home in Central Idaho. He was born and raised in Idaho and graduated from Highland High School in Craigmont. He joined the United States Air Force in 1991 where he worked as a Law Enforcement Specialist serving two years in Turkey followed by nearly two years in New Mexico. After his military career, with a desire to continue in public safety service, Adamson moved to Twin Falls and completed the law enforcement program at the College of Southern Idaho. He was soon hired as a jail deputy with the Twin Falls County Sheriff's Office and at the same time, served as a Reserve Police Officer for the Twin Falls Police Department. Wishing to move his family back to Central Idaho, Adamson accepted a position with the Nez Perce County Sheriff's Office in 1998 and spent three years as a Patrol Deputy. In 2001, Captain Adamson started his career with the Idaho State Police District 2. He was soon promoted to Detective and investigated many major cases with significant impact on public safety, including narcotics trafficking to homicides. In 2012, Captain Adamson went back to patrol serving as a Patrol Sergeant and Patrol Lieutenant. Captain Adamson is a recent graduate of Northwestern University School of Police Staff and Command session #474.

"All of us at ISP could not be successful in providing the highest quality of public safety services to the people of Idaho without the support of our families, friends, and the communities we serve. That support keeps us going and keeps our roads and neighborhoods safe. We work hard to keep the trust and support of public and we're very grateful for it, particularly here in Idaho," said Capt. Adamson.

Adamson takes over as Captain for District 2 following the retirement of Captain Ed Westbrook. Westbrook retired last week after serving with ISP in Lewiston for 23 years.

About ISP District 2:
ISP District 2 is based in Lewiston and includes Latah, Nez Perce, Lewis, Clearwater, and Idaho Counties. In all, the District stretches from Mineral Mountain in the north to a point just north of the 45th parallel in the Little Salmon River canyon. It encompasses one of the largest geographical areas in the state, with one of the smallest population of all the Districts. District Two borders Oregon and Washington on the west and Montana to the east.
Notable landmarks in the area include the world-famous Hells Canyon, the Main and Little Salmon Rivers, the Nez Perce Indian Reservation, the Frank Church River of No Return Wilderness and, the University of Idaho. The district is known for its famous Salmon and Steelhead fishing on the Clearwater and Snake Rivers. Lewiston has the only inland seaport and it is utilized to ship wood and farm products worldwide. Five of Idaho's six wild and scenic rivers run through North Central Idaho. The district is home to the Dworshak Dam, the highest straight-axis concrete dam in the Western Hemisphere. 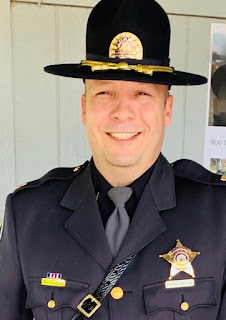 Posted by Idaho State Police at 9:55 AM