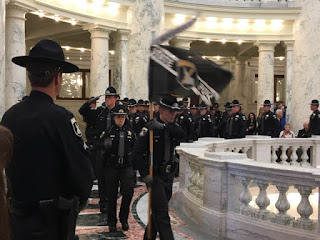 
A ceremony today at the Idaho State Capitol celebrated 16 new ISP Troopers soon be serving communities across the state. The graduation culminates 18 weeks of training to prepare the new troopers to serve the Citizens of Idaho.

Governor Brad Little attended today's graduation thanking the families of the recruits, saying Idaho is a better place because of their presence.

"Law enforcement is one of the most important things that we can do in the State of Idaho to comfort and protect our citizens," he said.

Colonel Ked Wills said, trooper training is very intense at times, he shared some light hearted moments, like some of the 13 nick names earned by one of the new recruits during their 18 weeks of training. More seriously, the colonel reminded ISP's newest troopers of leadership and service they bring to Idaho.

"In their new career of service to the Citizens of Idaho, I am certain these new troopers will be valuable partners to both law enforcement and to the communities they serve. From Sandpoint to Pocatello, the ISP tradition of providing public safety service and professionalism is well represented," said Colonel Wills.

The colonel also thanked the families of the new troopers who supported them during their training for the past four months at the ISP Post Academy in Meridian.

State Senate Pro Tem Brent Hill, also spoke at today's ceremony, thanking the new troopers for choosing an honorable career in public safety. Senator Hill reminded the troopers of the positive influence they can have even on Idaho's youngest citizens. The Senator introduced his grade school age grandson who was attending the ceremony and wants to someday serve as a law enforcement K-9 officer.

Following with the tradition of statewide service, today's graduation took place in the rotunda of the Idaho statehouse. Also a tradition upon graduation, the new troopers were presented their badges and the campaign hat ISP Troopers are famous for and proud to wear.

These new troopers have been assigned to one of the six ISP Districts across the state and will soon start the next phase of their training in the field.
Posted by Idaho State Police at 3:09 PM