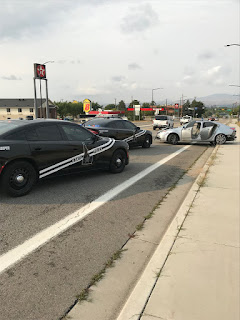 On September 8th, 2019, at approximately 4:53 p.m., the Idaho State Police was notified of a possible impaired driver westbound on Interstate 84, east of Boise in Ada County, Idaho. The reporting party stated a silver 2013 Acura TL (Idaho plates) was unable to maintain its lane and driving at varying speeds. Troopers located the vehicle near the Broadway exit and attempted to conduct a traffic stop. The vehicle pulled to the side of the Interstate and then took off at a high rate of speed as the Trooper was approaching the vehicle. The Acura rear ended a 2017 Ford F150 while evading police. The Acura continued west on Interstate 84, where it took the Vista Avenue off-ramp. Troopers initiated a PIT (Pursuit Intervention Technique) maneuver on the Vista Avenue off-ramp. The Acura spun around and continued towards Vista Avenue. The Acura turned north onto Vista Avenue, where Troopers initiated a second PIT maneuver. The Acura spun around and became disabled. The suspect, later identified as Oscar C. Moreno, exited the vehicle and attempted to elude Troopers on foot. Troopers caught Moreno after a short time and placed him into custody. A drug detection K-9 from the Boise Police Department assisted with the location of contraband within the Acura. Moreno was transported to the Ada County Jail where he was charged with: Driving Under the Influence - Excessive, Possession of an Open Container of Alcohol, Possession of Marijuana, Possession of Drug Paraphernalia, Resisting and Obstructing Officers, and Felony Attempting to Elude a Police Officer.

The Idaho State Police would like to thank all the citizens who report impaired or dangerous drivers on Idaho's roadways. We would also like to remind people if law enforcement is pulling you over, please pull over for the safety of yourself and others.

Please use *ISP (*477) to report impaired or dangerous drivers.