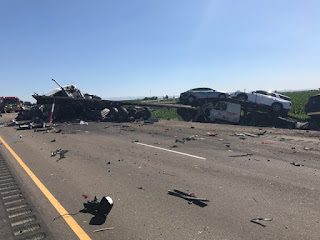 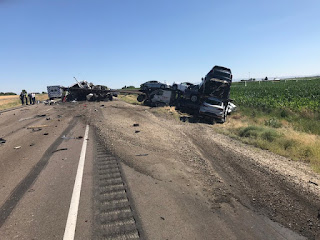 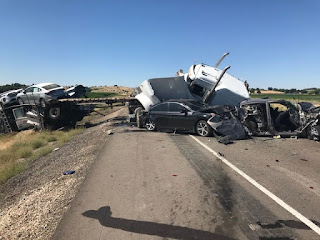 On July 19, 2019, at 3:39 PM, Idaho State Police investigated a multi-vehicle injury crash eastbound on Interstate 84 at milepost 21, west of Caldwell.

The following people and vehicles were involved:

Bryant was driving eastbound on I84 at milepost 21, when he failed to slow for stopped traffic in front of him. His vehicle collided with the rear of Hale's flatbed trailer, which then jack-knifed. What followed was a multi-vehicle chain reaction crash, involving the nine other vehicles listed.

The lanes were blocked for approximately seven hours while crews worked to clear the scene.

This crash is under investigation by Idaho State Police.

The Idaho State Police is currently on scene of a crash eastbound Interstate 84 at milepost 21.5, west of Caldwell. All eastbound lanes are blocked at this time.