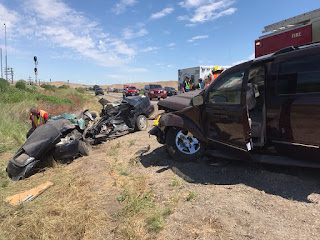 Redick failed to yield at a stop sign and was impacted by Ruiz. Redick succumbed to her injuries at the scene. Next of kin has been notified.

Ruiz, along with his passengers, were transported via ground ambulance to Weiser Memorial Hospital in Weiser.

All occupants were wearing seat belts.

The northbound and part of the southbound lanes were blocked for approximately three hours.

This crash is under investigation by the Idaho State Police.

The northbound and southbound lanes are open. More information will follow as it becomes available.

Idaho State Police is investigating a crash on US-95 at Cox Road, approximately five miles north of Payette.

The northbound and part of the southbound lane is blocked.