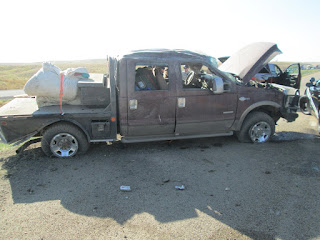 On Sunday, July 28, 2019, at approximately 5:35 p.m., Idaho State Police investigated a fatal crash westbound Interstate 84 at milepost 11, south of New Plymouth. Jon Michael Cason, 28, of Snyder, TX was driving eastbound on Interstate 84 in a 2005 Ford Pickup. Cason drove off the right shoulder, overcorrected, came back on the road and went off into the median. The vehicle overturned and came to rest in the westbound lane of travel. Cason and a passenger, Joseph Sykes, 33, of Bruneau, ID, were ejected from the vehicle. Sykes succumbed to his injuries at the scene of the crash.

Next of kin has been notified. Neither occupant was wearing a seatbelt.

Idaho State Police is investigating a crash westbound Interstate 84 at milepost 12, south of New Plymouth. The left east and westbound lanes are blocked. More information will be released as it becomes available.