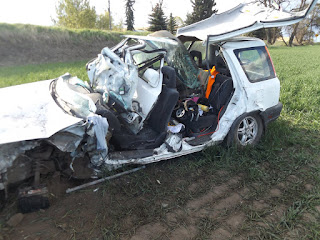 For Immediate Release: <05/7/19 0953>
Please direct questions to the District Office

On May 7, 2019 at 5:33 a.m. an injury crash occurred on US95 at milepost 341.4, 3 miles south of Moscow, Idaho. A white 2000 Honda CRV driven by Katie M Hamilton, 24, of Lewiston, Idaho was travelling northbound when she fell asleep and drove left of center. She struck the trailer of a Swift semi-truck that was driven by Mame Sylla, 43, of Atlanta, Georgia. Hamilton's vehicle spun and went off the southbound shoulder and continued 70 feet into a farm field. Hamilton was extricated from the vehicle and transported by Lifeflight to St Joseph;s Medical Center in Lewiston. Sylla was transported to Gritman Medical and released with no injuries. Seatbelts were worn by both drivers. One lane of US95 was blocked for approximately 3.5 hours for crash investigation.