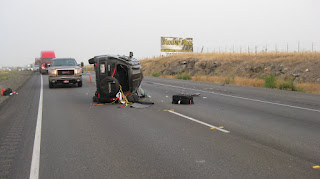 At 7:35 p.m., August 22, 2018, the Idaho State Police investigated a one-vehicle rollover crash in which two California women were injured. Elizabeth Widner, age 23 of Chino Hills, CA, was westbound on I84 at milepost 182, the Eden Rd. Exit in a Honda CR-V. Widner swerved to the right to avoid traffic cones, left the roadway, came back to the left, and rolled, coming to rest in the middle of both lanes. Both Widner and her passenger, Norma Widner, 56, also of Chino Hills, were transported to Saint Luke's Magic Valley Regional Medical Center in Twin Falls. Both women were wearing their seatbelts. Traffic was blocked for approximately twenty minutes. The crash is under investigation by the Idaho State Police with assistance from Jerome County SO, Kimberly PD, and First Segregation Fire District Station 53.