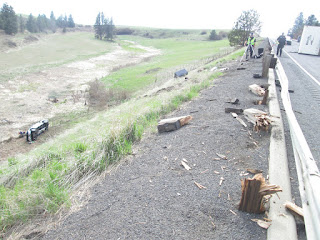 On May 11, 2018, at approximately 1:38 pm, the Idaho State Police responded to an injury crash northbound US95 at Chambers Road near Culdesac, ID. A maroon 1997 Ford F150, pulling a boat, was traveling northbound on US95. The Ford was being driven by Steven Eckhart (31) of Coeur d Alene, ID when it went off the northbound side of US95 near Chambers road. The Ford and boat continued northbound off the roadway, and impacted the small embankment leading up to Chambers road, causing the Ford to go airborne. There was a blue 2009 Dodge Caliber, traveling eastbound on Chambers road, stopped at the stop sign of Chambers Road and US95. The Dodge was being driven by Brenda Tannahill (50) of Culdesac, ID. The passenger side of the Ford, as it was airborne, impacted the driver side of the Dodge, and rolled over the top of it. This caused severe damage to the tops of both vehicles. The trailer and boat, which was being pulled by the Ford, became detached from the vehicle and crashed off of the roadway, just north of Chambers road. Both the Ford and Dodge, after impact, came to a final rest in the southbound lane of US 95. Eckhart was not wearing a seat belt and was ejected from the Ford. Tannahill was wearing a seatbelt. Due to the severity of Eckharts injuries, he was flown to Saint Joseph Regional Medical Center in Lewiston. Eckhart was then flown by Life Flight to Sacred Heart Medical Center in Spokane, WA. US95 was blocked for approximately 2 hours due to the crash. Investigation continues by the Idaho State Police