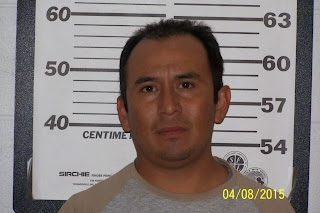 POCATELLO - The Idaho State Police have arrested a Utah man suspected of trafficking heroin from Utah to Idaho after a traffic stop on Wednesday evening.

On April 8th at about 7:30 p.m. an Idaho State Trooper stopped a 2006 Honda Civic traveling northbound on US91 in Franklin County near the Utah border for a traffic infraction. During the traffic stop the driver consented to a search of his vehicle. During the search the trooper found approximately 201.4 grams of brown heroin in the vehicle. The street value of the heroin is approximately sixty thousand dollars ($60,000).

The driver of the vehicle, Andres Avila-Rivera, 34 of Ogden, Utah was arrested for Felony Trafficking in Heroin in violation of section 37-2732B(6)(C), Idaho Code. If convicted, Avila-Rivera faces a mandatory minimum sentence of fifteen (15) years in prison and a fine of twenty-five thousand dollars ($25,000).

Avila-Rivera was booked into the Caribou County Jail and will be arraigned in Sixth Judicial District Court in Franklin County.