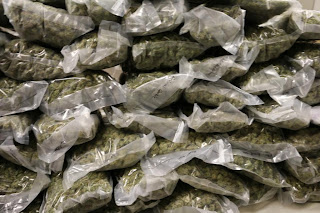 MERIDIAN - On Saturday, October 25 at about 2:00 a.m. Idaho State Police arrested a Florida man along I-84 at milepost 42 in Meridian for trafficking marijuana. A trooper stopped to check on a driver of a tractor trailer that was stopped along eastbound I-84 between the Black Cat and Ten Mile overpasses. The driver, identified as Michael John Wojciechowski, 48, of Dunnellon, Florida had stopped to sleep while waiting for the construction on the interstate to finish.

Upon making contact with Wojciechoski the trooper detected the odor of marijuana and when questioned the driver admitted to having an ounce of marijuana. Upon a search of the vehicle the trooper located approximately 150 pounds of marijuana in the cab of the semi. Wojciechowski was arrested for Felony Drug Trafficking and booked into the Ada County Jail. The street value of the marijuana seized is estimated at over $500,000. The marijuana is believed to have come from Washington and was traveling through Idaho headed to the eastern part of the United States.

The Idaho State Police seized the marijuana, $2,000 in US currency and the tractor trailer. The mandatory minimum sentence for the trafficking of marijuana in excess of twenty-five (25) pounds is five (5) years in prison and a fine of $15,000. The maximum penalty for trafficking in marijuana in any amount is fifteen (15) years in prison and a fifty thousand dollars ($50,000) fine.

The Idaho State Police continue to investigate this case.