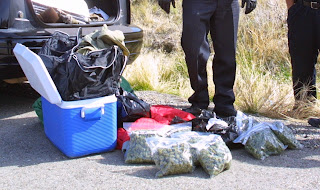 MERIDIAN - The Idaho State Police arrested a California man this afternoon during a traffic stop along US Highway 95 at milepost 9 in Owyhee County for trafficking marijuana. Troopers with the Idaho State Police stopped a black 2003 Ford Focus traveling eastbound on US95 for speeding. The driver of the vehicle was identified as Kenneth Rinard, 52, of Shingle Springs, California.

During the traffic stop, troopers detected the odor of marijuana and called for a drug detection K-9 that was working with the troopers from the Weiser Police Department. The K-9 subsequently alerted to the car. Troopers located a cooler concealed under sleeping bags in the trunk of the automobile. The cooler contained eight gallon-sized bags with approximately a half pound of marijuana in each. Rinard was arrested for Felony Drug Trafficking and Misdemeanor Possession of Drug Paraphernalia and booked into the Owyhee County Jail. The total weight of seized marijuana was approximately 4 pounds with an estimated value of $8,000.00.

The Idaho State Police were working a multi-agency emphasis patrol in the area.