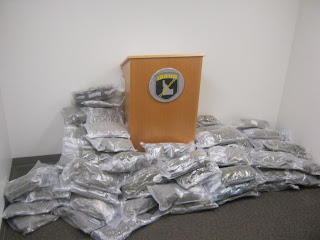 On December 19, 2012, at approximately 6:50 p.m., Idaho State Police stopped a 2007 Honda Ridgeline, eastbound on Interstate 84, near milepost 5, in Payette County. The driver identified as Kennard Mueller, age 39 of Jacksonville, FL, was stopped for a traffic violation.

A Payette County Canine alerted to the odor of drugs on the exterior of Mueller's vehicle. A search of the vehicle revealed marijuana with a total weight of 106 lbs. The marijuana was believed to be in route from Washington to Illinois.

Mueller is being charged with Felony Drug Trafficking.